During these last two days of Season 7, we are recapping everything new that took place over the last 12 weeks.

This is the first installment in the series but be on the lookout for all the weapons/items, all the events, and all the best Fortnite Creative submissions that took place during this season.

Season 7 introduced more new named points of interest (POI) than any other season in Fortnite’s history.

To begin, let’s start with the map from Season 6 followed by the final map at the end of Season 7. Unfortunately, there are no screengrabs of the final map from before rotation into this season so the picture below is from the first patch. 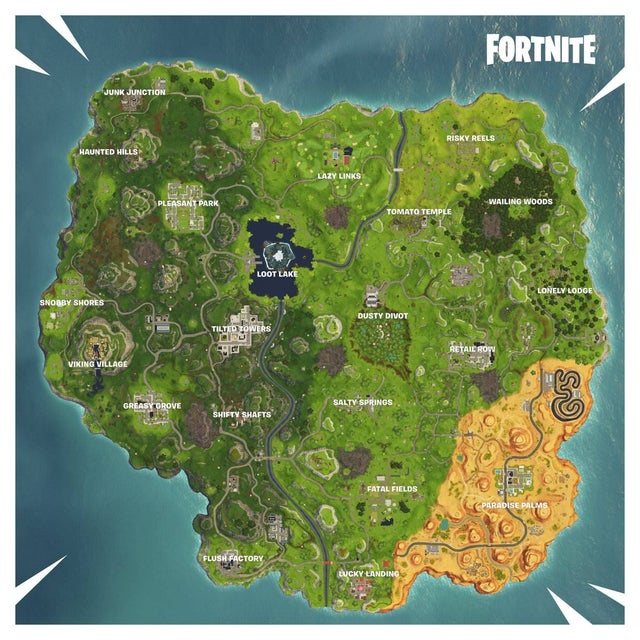 Not a ton changed during Season 6. The focus of the storyline was on Kevin the Cube and Loot Lake was the only POI that changed drastically throughout the season. As the Cube continued its journey, Loot Lake became Leaky Lake and changed slightly every week.

Other than that, the map above is pretty close to what the end of Season 6 map looked like. Now compare that to the final map from Season 7. The Fortnite map on February 26th

Clearly a whole lot different. We will start with the ice biome. At the end of Season 6, the focus was on the impending ice storm off the coast by Flush Factory. The ice storm delivered in a big way and actually expanded the Fortnite map significantly.

The ground where Frosty Flights sits didn’t exist before Season 7, neither did the yeti cave or the islands off the coast. The ice storm totally covered Greasy Grove in a sheet of ice that became the base of Polar Peak.

The peak was the central focus of most of the Season 7 storyline with the ice castle slowly thawing as the season went along.

Happy Hamlet came in hot and replaced Flush Factory on the coastline. Viking Village had its name wiped off the map but the location was still there undergoing some minor changes as part of the snow biome.

Shifty Shafts remained on the map but stayed snowed in for the duration of Season 7 as well.

The other section of the map to undergo serious changes was the opposite corner. The most consistent change was the updated design on The Block and in Season 6’s map, we can see old fan favorite Risky Reels up in that spot.

Down below The Block is Wailing Woods which has been the section with the most changes to it recently.

The grass in the woods is drying up leading people to believe the Fire King will make his home in the top right corner of the map.

Those are the major changes to the map but smaller changes included variations of different already existing POIs. A submarine ended up on a mountain by Frosty Flights and a giant turtle was added to a hill by Lonely Lodge.

Cube remains at Loot Lake fell throughout the season before stabilizing in early January.

The stone man and the stone lady statues began moving into different positions and eventually waved at each other over the mountains. The picture was taken by /u/mckhrt

Finally, Earthquakes started causing issues around the map. Mostly just cracks in the ground but the quakes did cause a bridge to collapse, setting up the main event of Season 8.

What was your favorite change in Season 7 and what was your least favorite? Tell us in the comments below and be on the lookout for the next three parts of this series!