Almost everyone who plays Fortnite has avoided looking at just how much of their hard earned money has turned into V-Bucks.

The Item Shop’s rotation every 24 hours keeps people coming in to check out what is new and what old skins may be coming back.

There is no doubt that the Item Shop is set up to be successful. Epic’s absurd profits are the only place you need to look to see that.

Still, there might be a way to improve the Item Shop and have players part with even more money.

This redesign from easkate seems like it would do just that: 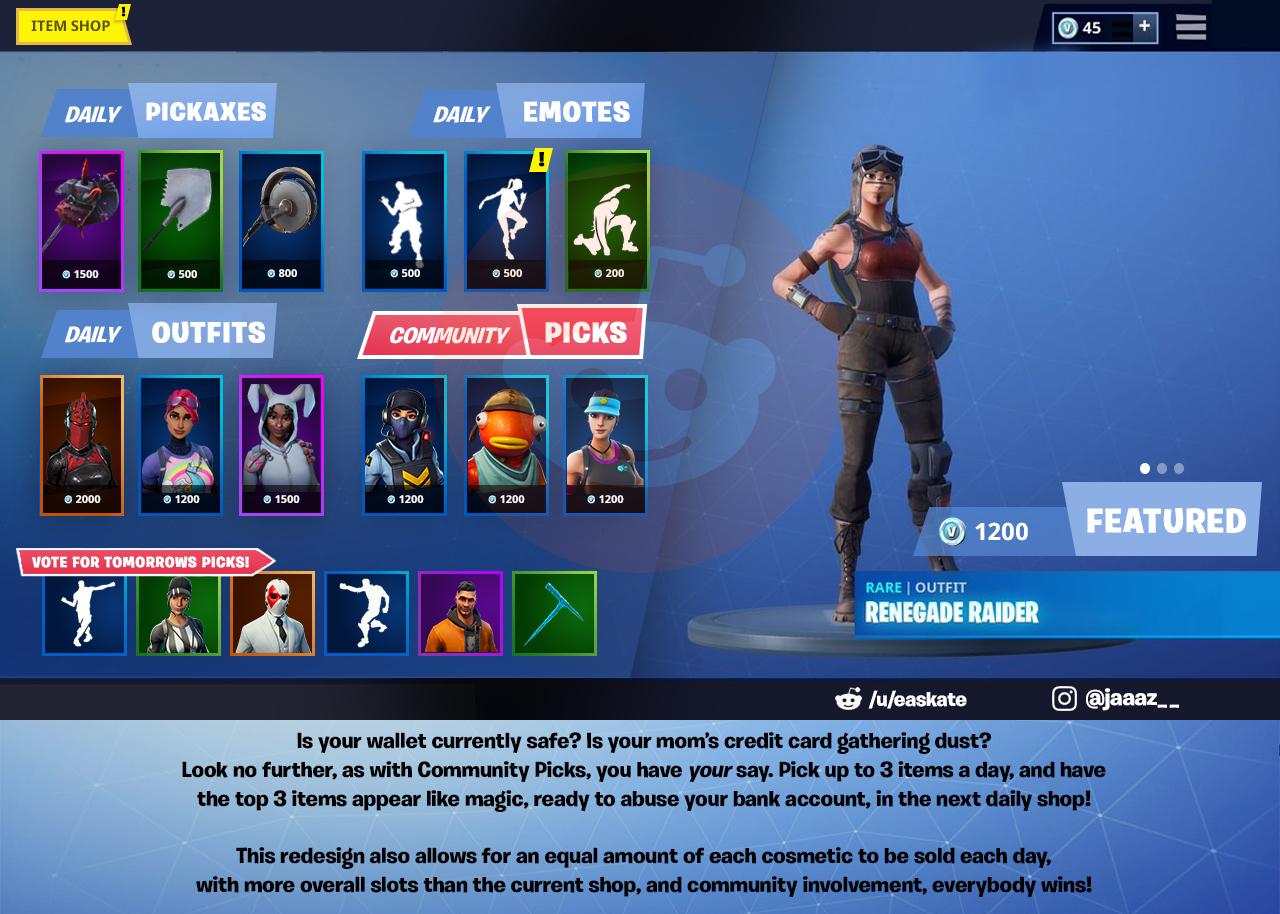 What this does is just subsect the design further. Each area gets its own individual slot to be filled with three new emotes.

But the real area where this shines is the community suggestions. Epic should implement this change tomorrow and they would immediately see an impact on their bottom line.

Each rotation comes with some new things on the theme but then also brings some old things back. What those old things are is mostly a crapshoot.

With this suggestion, they could just place six possibilities below and be guaranteed that the ones chosen are the ones that will sell the most.

In addition, having more things for sale equates to more money, just look at Walmart.

The one argument against expanding is keeping things exclusive. If too many items get added then people may stop paying attention to the daily Item Shop rotation, but I think the benefits still outweigh the drawbacks for this redesign.

Doorbells in Fortnite could finally have more utility than just a way to complete challenges. Not many people have thought too deeply about doorbells in Fortnite. They’re there, but serve no practical purpose other than giving Epic a way to offer a group of annoying challenges. The challenge of “Ring the doorbell of a house with an enemy inside” has come up at least twice in the past few seasons. It’s one of the more difficult challenges to complete as it requires you to consider your challenges over a winning strategy.

Doorbells are completely useless when these challenges aren’t active. You can troll an enemy who is hiding inside of a house, but ringing the doorbell won’t give you any advantage. Reddit user u/Fort_power posted a concept to the r/FortniteBR subreddit that would change this. In his concept, doorbells would allow you to mark a player for five seconds.

Chapter 2 has brought the idea of marking players to the forefront. We have LTMs that let you mark players along with in-game mechanics like the Shakedown and Flare Gun. Since this is the case, this doorbell concept would fit right into the game.

The first part of this concept is sound, but the ability to pick up a doorbell and take it with you seems a bit unnecessary. We already have the Flare Gun, which does damage and sets structures on fire along with revealing player locations. No one would carry a doorbell over a Flare Gun.

We love the general concept of giving doorbells a practical use in Fortnite, however. Epic have taken several player suggestions and concepts into account before, and we hope that they do the same with this one.

We spoke with Ballatw about competitive Fortnite, changes to the arena system, tournament formats, cheating, and a whole lot more.

All signs point to The Ghostbusters coming to Fortnite